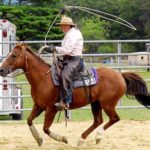 Kristen began her career in 1981 as a graduate of the University of Massachusetts in Animal Science. She managed a dairy farm in Vermont and then returned to UMass where she worked as the Livestock Manager for 13 years. It was while managing the sheep flock at UMass that Kristen purchased and trained her first Border Collie. Kristen purchased Little Brook Farm in 1985. She returned to school in 1993 after her son Travis was born and received a second degree as a registered nurse. She currently works as an elementary school nurse and has continued farming and training Border Collies. 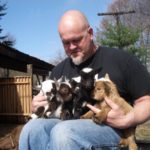 Nobody can resist a baby goat.

Tom and Kristen were married in June of 2012. Tom is the owner and Master Instructor of Western Mass Martial Arts in South Deerfield, Massachusetts. He has become quite an adept farmhand over the past decade here at Little Brook Farm. Tom not only takes care of all the mechanical farm needs, but has learned to handle the livestock and the many challenges that come with it. 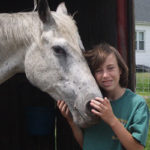 Travis and Blue (a few years ago!)

Travis is Kristen’s son and has been her right-hand man on the farm. He has helped with the farm and livestock since he could walk and has assisted with her Border Collie herding demos since before he could walk. While Travis is now pursuing his own career as a chef, he continues to care for the farm when Kristen and Tom need a holiday! 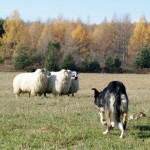 Tilly walking up on some ewes

Tilly and Gemma are the Border Collies that help manage and move the livestock here at Little Brook Farm. Each has her own style of working. Visit the Working Dogs page for more information and pictures.